“The historic enrollment growth DCPS is seeing is a testament to the incredible work our school leaders and educators do every day to meet the needs of our students,” said District of Columbia Public Schools Chancellor Lewis D. Ferebee. “My priority is to provide a great school in every neighborhood at every grade level, and I would like to thank our families for trusting us to ensure their children are receiving a high-quality education.” 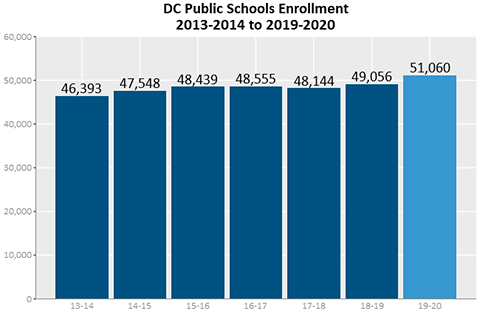 DCPS saw a four percent increase in in-boundary enrollment, and schools across all eight wards saw growth compared to last school year due to a variety of factors, including:

“Families are choosing Anacostia because they know we care deeply about each and every student,” said Anacostia High School Principal William Haith. “Our increased enrollment is evidence that more families trust us to give their children the education they deserve. When members of our community ask #WhyAna, my answer is because we take a whole child approach to teaching and learning.”

This school year, DCPS launched Bard High School Early College DC in Ward 7, which provides students with the opportunity to earn their high school diploma and up to an associate degree from Bard College. In Ward 4, Coolidge High School launched the Early College Academy, where students gain the valuable experience of attending college-level courses while earning their high school diploma, as well as up to an associate degree from Trinity Washington University.

Educators welcomed 6th grade students to DCPS’ new stand-alone middle school, Ida B. Wells Middle School in Ward 4, which will provide a rigorous and supportive learning environment for students, while also engaging and developing them as change agents in their communities. DCPS also expanded access to high-quality prekindergarten by adding ten classrooms at schools throughout the District.

In 2017, DCPS released its strategic plan, A Capital Commitment, which includes a goal of serving 54,000 students by 2022. Today’s preliminary enrollment numbers represent the largest annual growth DCPS has seen in more than 50 years, and strong progress toward meeting that goal.

*These figures represent preliminary data. Final audited enrollment figures will be published by OSSE in early 2020.

**State level enrollment subtotal released by OSSE does not equal DCPS + Charter totals due to student duplications. Duplications have been removed from the state level numbers, but may still exist at the sector level in these preliminary, unaudited figures.